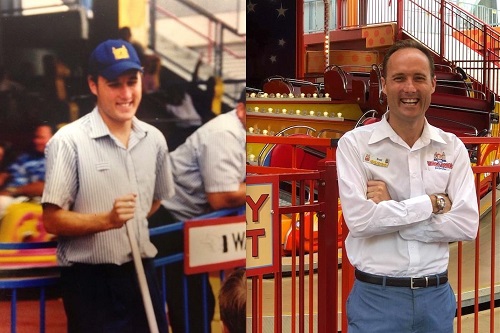 Brad Loxley, Senior Manager at Luna Park Sydney, has announced that he is to end a 20 year association with the iconic attractions to take on the role of Chief Operating Officer for Vietnam’s Sun World, the entertainment brand of the Sun Group.

In an announcement on social media, Loxley advised “for 20 years I have been involved with this Australian institution, and I have been lucky enough to be part of the wonderful team that has brought the magic back to Sydney’s Luna Park.

“Now it’s time for me to take on a new challenge. At the end of December, I will be relocating to Vietnam to take on a new role as COO of Sun World, one of the largest attractions operators in Vietnam, where I’ll be overseeing the operation of several diverse and exciting attractions.”

Loxley (pictured when he first joined Luna Park Sydney and today) began working at the Sydney attraction in 1998 before going on to join its management team in 2004.

Since then he has become a noted industry identity, with strong skills in operations, safety, human resources and staff development.

He is Board member of the Australian Amusement, Leisure and Recreation Association (AALARA) and a longstanding member of the Human Resources Committee of the International Association of Amusement Parks and Attractions (IAAPA), developing education programs to meet the needs of human resources operations personnel in attractions around the world.

His career path was profiled in the July /August 2013 issue of Australasian Leisure Management.

Departing his role, Loxley advised “meanwhile in Sydney there’s a fabulous job going for a vibrant, creative and energetic senior manager at a great company ... leading an amazing team.”