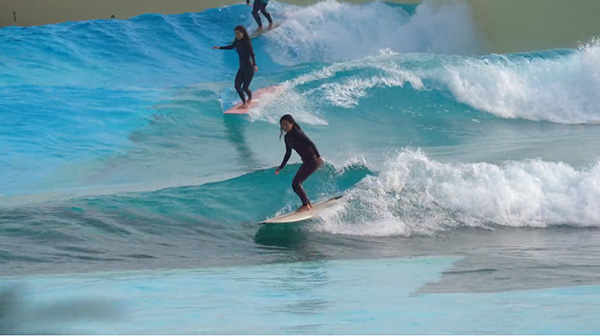 Wave Park, Asia’s largest surf park, has been officially opened by Spanish Engineering Company Wavegarden and Daewon Plus Group with a formal ceremony and a testing surf session in Siheung, South Korea.

Wave Park is located on a new 167,000 metre2 waterfront development on Turtle Island, less than an hour’s drive from Seoul. The first stage of the US$2 billion project was completed in just 18 months and provides aquatic activities like kayaking, SUP and swimming in zones with and without waves. Stage 2 of the development includes six hotels, convention centres, marinas and museums.

The centrepiece of the mixed-use real estate development, Wave Park, is the world’s largest Wavegarden Cove surfing lagoon. New technology means the South Korean site offers longer waves and barrels and a wider variety of waves than any other surf park. The landmark surfing lagoon has opened its door to the public this weekend.

WSL Airbourne surfer, Jacob Szekely advises “I have surfed every credible wave park in the world and this was my best surf experience.

“The clear water and the wide variety of awesome open face and barrel waves is incredible. However the air new section is simply insane. On the first day of testing I landed the best aerial of my life.”

Wavegarden Chief Executive, Josema Odriozola advised "we are delighted to bring the incredible sport of surfing and beach lifestyle to South Korea. With consistent waves of different sizes and shapes, Wave Park is going to be the new beach of Seoul and the place to surf for families, professional surfers, and everyone in between.”

The Wavegarden Cove technology is world leader in not only in the quality and quantity of waves, but also in terms of economic and environmental sustainability. Comparability studies reveal that Wavegarden’s technology uses 10 times less energy than other pneumatic wave generation systems in the market today.

And Wavegarden’s innovative water treatment system, developed specifically for wave lagoons, keeps the water transparent and clean throughout the year. The system is based on

a series of sustainable treatments including fine filtration, ozone and UV disinfection, and low chemical chlorination.

The official opening of Wave Park was attended by a 100 VIPs, the maximum number of guests permitted due to COVID-19 regulations. The gathering assembled the key people responsible for bringing the project to life including Sam-seop Choi, Chief Executive of Daewon Plus; Lee Jaemyung, the Governor of Gyeonggi Province; Im Byeong-taek Mayor of Siheung City; Juan Ignacio Morro, Spanish Ambassador and Wavegarden’s Founders Josema and Fernando Odriozola, Karin Frisch and their sons.

For more information go to www.wavepark.co.kr