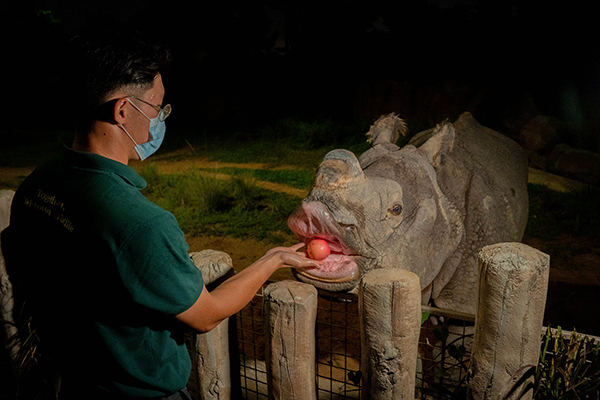 Night Safari - the world's first nocturnal zoo and managed by Mandai Wildlife Reserve - is for the first time in Singapore, offering visitors the opportunity to get up close and meet the elusive, prehistoric-looking Indian rhinoceros. The new feeding programme which opens for online public booking today (17th February) features Newari, one of the two Indian rhinos that arrived at Night Safari in April last year.

The concept of a nocturnal park in Singapore was suggested in the 1980s by the former executive chairman of the Singapore Zoo, Dr Ong Swee Law. Constructed at a cost of S$63 million, the Night Safari was officially opened on 26th May 1994 and occupies 35 hectares of secondary rainforest adjacent to the Singapore Zoo and Upper Seletar Reservoir. The Night Safari currently houses over 900 animals representing over 100 species, of which 41% are threatened species.

To get Newari ready for his debut at the exhibit’s feeding platform, Night Safari’s animal care team has been working with Newari for over six months. Of the two brothers, Newari is the bigger foodie and more comfortable around people, especially when it involves his favourite treat – carrots! Aside from the exciting chance to feed an Indian rhino, guests will also get to interact with the animal care team and hear from Newari’s caretakers to learn more about this intriguing species through anecdotes and fun facts they have to share.

Guests can visit the Indian rhino habitat next to Night Safari’s East Lodge at 7.30pm on operating nights to participate in the feeding for a contribution of $10.  All contributions from feeding sessions come with Conservation Included and will go into supporting conservation projects in Singapore and Southeast Asia.

Feeding sessions must be booked online. With limited slots available, book in advance and secure slots