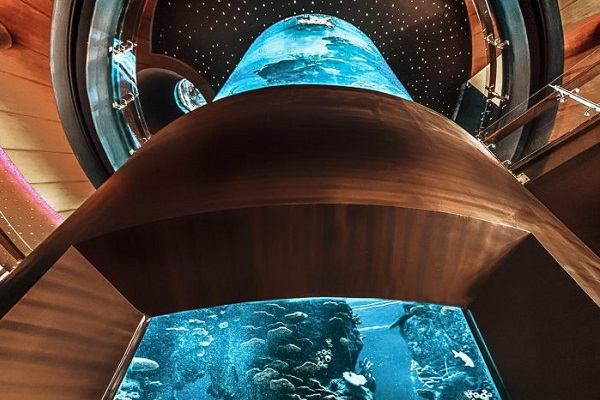 The Mall of Dilmunia, a family-centric mall concept in the Arabian Gulf kingdom of Bahrain has this officially opened the Bahrain Aquarium showcasing over 2,700 fish in the Middle East’s first and largest mall-based aquarium.

The centrepiece of the mall, the cylindrical aquarium links with retail, entertainment and education, stretching over four floors - allowing visitors to both watch and interact with marine life, either as a stand-alone activity or combined with shopping or dining.

Containing around 700,000 litres of seawater and with 85 species such as stingrays, clownfish, angelfish and sharks living in 17 metres deep space, the Bahrain Aquarium is described as being more than a backdrop for the Mall’s activities.

Educational tours and classes will be offered, giving an insight into the ecosystems and marine life of Bahrain while certified divers will also have the opportunity to explore the cylindrical tank from the inside.

As part of its opening, Bahrain Aquarium screened a short documentary that told the story of the partners who helped bring this project to the surface, showcased the way in which ideas were developed and the steps that were taken to make this major project a reality.

Being the first and largest cylindrical aquarium in a mall, this project is a landmark in the history of the Bahrain making it one of the most iconic projects around.

Introducing the attraction, Mall of Dilmunia Deputy Chief Executive, Rebecca Charlotte Arnold stated “we are thrilled to be launching soon a diverse mix of exhilarating activities for aqua lovers in the kingdom.

“Mall of Dilmunia is confident that Bahrain Aquarium will give people the opportunity to engage in a range of activities which will be fun, interactive, and educational.”

The cylindrical aquarium was built and shipped from Italy, and then carefully slotted into the concrete surround.

Arnold added “combining the mall’s strategic location, breathtaking views, various amenities and entertainment venues, Bahrain Aquarium is an outstanding addition to Mall of Dilmunia, cementing the mall’s position as being one of the most ambitious and forward-thinking destinations in the kingdom, where a new era of unique indoor activities will soon take shape."

The new attraction includes freshwater and marine life, as well as reptiles, amphibians, birds and mammals. Its aim is for “people to reconnect with nature” over 11 geographical zones and 60 exhibits.

21st April 2019 - Oman Aquarium opens within the Mall of Muscat