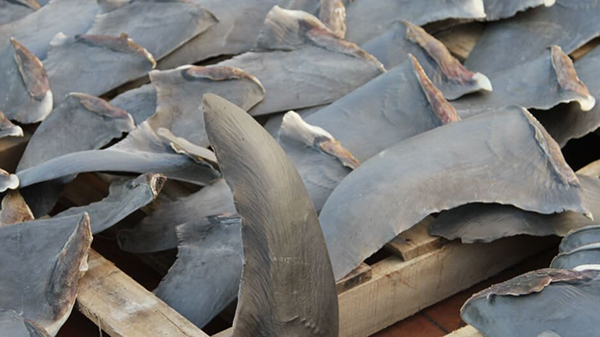 A report commissioned by the Australian Marine Conservation Society and Humane Society International has found that trade date discrepancies between Australia and its international trading partners suggests fins from endangered hammerhead sharks caught in Australian waters are possibly being traded illegally.

The report found that across several years, the amounts of fins recorded as exported from Australia were less than that reported by countries receiving the fins and in some cases, the discrepancy was reversed.

The report also found no record of the associated shark meat in the export data which raises the question of where this meat is ending up.

Based on the report’s comprehensive investigation, both Australian Marine Conservation Society (AMCS) and Humane Society International (HSI) state that the Australian Government needs to urgently review its recording and monitoring of the shark product trade, including conducting a long-overdue review of how Australian fisheries deal with the protection of endangered hammerheads.

“The disappearance of hammerhead meat from export data is also a concern. If it’s not being exported, where’s the tens of tons of meat from an endangered shark ending up every year? On Aussie plates as ‘flake’? Perhaps straight to the bin?”

HSI marine biologist Lawrence Chlebeck said that despite scalloped hammerheads being assessed as ‘Endangered’ in Australian waters, they are listed as ‘Conservation Dependent’ under Australia’s national environment laws, meaning they can still be commercially exploited providing certain conditions to promote the recovery of the shark are met. These conditions are yet to be fully met despite a 2018 deadline.

Chlebeck added “we want to see improvements in protections for scalloped and great hammerheads by listing them as Endangered under Australia’s national environment laws - a listing for which they fully qualify.

“The trade discrepancies uncovered in this report are deeply worrying and point to systemic failure. The mismatched export/import data provides no clear indication of how much is really being fished and where it’s ending up.

“It’s vital that the international trade of hammerheads meets international requirements that are in place to ensure that trade doesn’t come at the detriment of the species’ survival.”

Hammerheads are listed on CITES (the Convention on International Trade in Endangered Species of Wild Fauna and Flora) Appendix II meaning that “...trade must be controlled in order to avoid utilization incompatible with their survival.”

Dr Guida added “The Australian Government last properly reviewed how fisheries deal with hammerheads in 2014. That’s seven years ago and since then the conservation status of hammerheads has worsened, incredibly useful scientific information has come to light, and all the while we still haven’t got a proper grip on exactly how many hammerheads are being plucked from the water.”

Dr Guida continued “If Australia is serious about claiming to have sustainable fisheries, we’ve got to give endangered species the protections they deserve under law, and lift our game when it comes to monitoring and reporting trade data. These are fundamentals - protect what’s being driven to extinction and make sure that when you look at the numbers, it all adds up.”

The report, available to read here, was written by Jo-anne McCrea from consultancy firm Bio Inspecta.