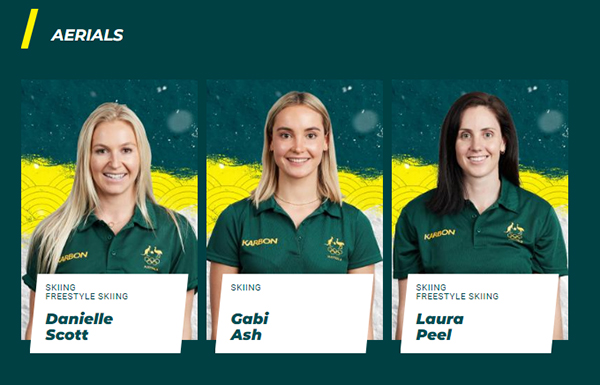 Australia will be sending its third largest Winter Olympic Team to the Beijing 2022 Olympic Games – with the team of 44 having the highest ever percentage of women.

The Australian Olympic Committee has announced the 44 athletes to compete across 10 disciplines will include 23 women and 21 men and with women making up 52.3% of the Team, it tops the Sochi 2014 figure of 51.7% as the highest female representation in Australian Winter Olympic history.

Snowboarder Scotty James and mogul skier Britt Cox will both compete at their fourth Olympics, joining just six other Australians to ever compete at four or more Winter Games.

With an average age of 25.43, the team features four teenagers, with snowboarder Valentino Guseli the youngest at just 16.

Freestyle Skiing, which incorporates Moguls, Aerials, Freeski and Ski Cross is the largest team with 13 athletes, followed closely by Snowboard with 11.

Tahli Gill and Dean Hewitt make history as Australia's first Olympic curlers, while Bree Walker will contest the women's monobob as it makes its Olympic debut.

Chef de Mission of the Australian Olympic Team for Beijing Geoff Lipshut celebrated the achievements of the athletes in realising their Olympic dream.

"Congratulations to all 44 athletes selected for the Australian Winter Olympic Team for Beijing," said Lipshut.

"All of these athletes have shown not just remarkable skill and tenacity in achieving their Olympic qualification on the snow and ice, but incredible resilience to overcome the challenges the pandemic has posed to them throughout this Olympic cycle.

"To make it to the starting line is a true achievement and I want to pay credit to all of these athletes.

"I also want to pay tribute to those athletes who may not have qualified due to the challenges of the pandemic – your contribution to your sport, your teammates and this Team will not be forgotten.

"From Scotty James and Britt Cox joining rare air as four-time Olympians, to the 20 athletes donning an Olympic uniform for the first time, this Team will represent Australia with pride.”

Lipshut added "we saw the impact an Australian Olympic Team can have on the nation last July and I know millions of Australians will be inspired and uplifted by this Winter Team. With athletes from Townsville to outback Western Australia, from metro capitals to the regions, these 44 athletes are fantastic ambassadors for our country and for winter sport."

Lipshut says the Australian Olympic Committee is focused on creating a performance environment for athletes in Beijing and notes "our job is to get the athletes to the Games and give them the opportunity to have their best day on their biggest day.

"If we can provide an environment that lets the athletes focus on doing what they do best, we know good results will follow, whether that's a podium or a personal best."

Lipshut also paid tribute to the enormous input of Winter Member Federations, Federal and State sporting institutes, governments, AOC staff and volunteers highlighting "while there will be 44 athletes realising their Beijing Olympic dream in Beijing, there is an enormous team behind each and every one that has made this possible.

"This Games cycle has thrown up enormous logistical complexities, for athletes to train, travel and compete in such a challenging environment.

"Each of the sports has been able to employ agile plans that have allowed these athletes to compete and qualify for the Games.

"Thank you to the Winter Member Federations, Australian Institute of Sport and state sport institutes, federal and state governments and the support staff, coaches, friends and families that have made this Olympic dream a reality for 44 young Australians.

"Thank you to the AOC sponsor family, for your ongoing support through what has been such a challenging environment for you as well. Through your support, 44 young Australians will get to represent Australia in Beijing, and millions of Australians will be inspired by the power of the Olympic spirit."