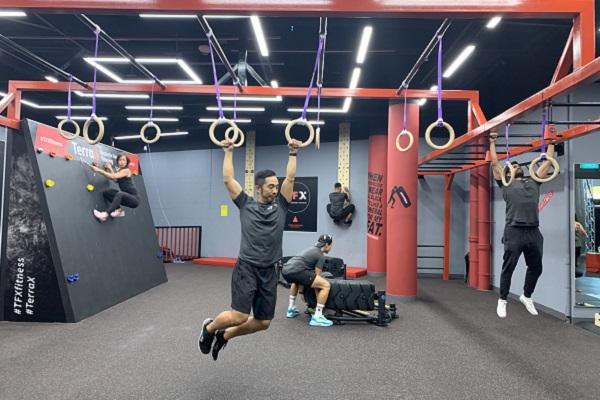 The Global Wellness Institute (GWI) has advised that Asia’s physical activity market - currently worth US$240 billion - is the world’s growth leader and will overtake North America by 2023.

GWI’s Move to be Well: The Global Economy of Physical Activity report shows that Asia is accounting for 40% of all global growth over the five years from 2018 and, despite the impact of COVID-19, will emerge with stronger consumer value post-pandemic.

The remaining 56% (US$465.9 billion) represents the enabling sectors (apparel and footwear; fitness equipment, sporting goods, and related supplies; and fitness and exercise-related technologies). 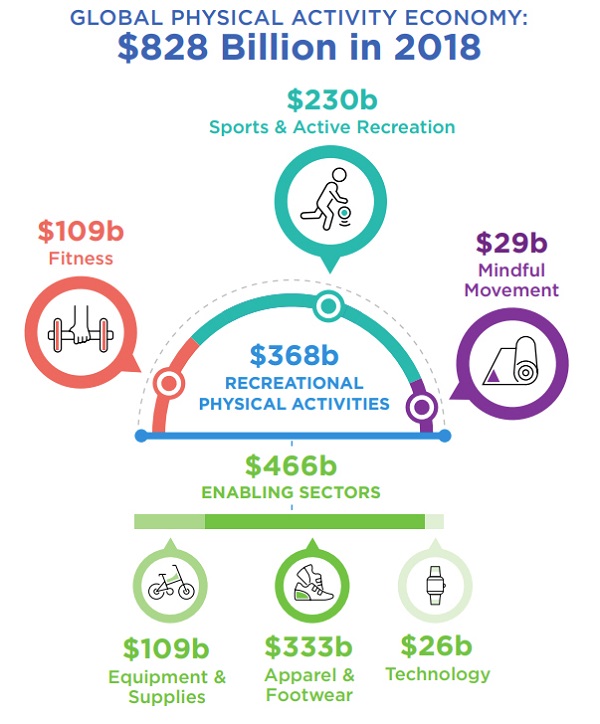 Per participant annual expenditures are very high in North America (US$1,345) and Europe (US$528) while significantly lower in the rest of the world.

Importantly, a large portion of the global population, especially in less wealthy countries, participates in recreational physical activities without spending much money - for example, playing soccer (football) in an empty field, swimming in a public/community pool, running in the streets, or doing tai chi in a park. Many of these free activities depend on publicly funded infrastructure such as local parks and recreational centres, but participation in these activities still generates significant private sector economic activities, such as athletic shoes and clothing purchases, government purchases of equipment for community gyms or parks, etc.

Asia-Pacific Developments
Asia-Pacific has one of the largest and most diverse physical activity markets in the world.
• Valued at US$240.4 billion, the physical activity market in Asia-Pacific is large, diverse, and dynamic.
Buoyed by economic growth, the rising purchasing power of the middle-class, and a growing interest in healthy and active lifestyles, Asia’s physical activity economy is fast-growing and increasingly competitive. Consumers in higher-income countries and in the major metropolises keenly follow the latest fitness and recreational trends and offerings - from Europe’s running craze to North America’s passion for yoga and Pilates, and from spinning and HIIT to martial arts and dance. Meanwhile, Asia’s vibrant private sector innovates, imports, improvises, and adapts to meet rising demand with a wide range of business models, including comprehensive luxury gyms, boutique studios, discount gyms, mobile gyms, 24-hour establishments, group exercise, personalised training, aggregators, apps, technology, etc.
The growing range of options provides consumers with diverse offerings that include the newest classes, equipment, and technology-enabled services, at every price point. Yoga, Pilates, and other mindful modalities are in high demand, as are sports and recreational activities.

• Not surprisingly, the region is led by China and Japan, which rank second and third globally for the overall size of their physical activity markets. Across the region, physical activity participation varies widely; Australia and New Zealand boast some of the highest participation rates in the world, while South and South east Asian countries lag far behind. As noted earlier, the value of the market is determined by the number of participants and their spending. Importantly, many people in Asia conduct their leisure-time physical activity in public places with little or no spending.

For example, exercise in public outdoor gyms is very popular in China, especially among seniors. That is a large reason why the average per participant spending on doing recreational physical activities is US$85 per head in Asia-Pacific, as compared to US$544 in North America and US$256 in Europe. 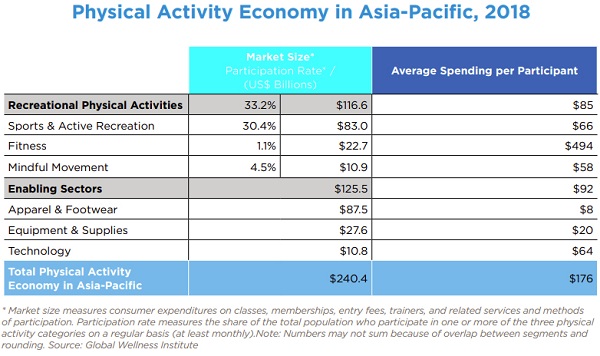 • Estimated at US$109.3 billion by GWI, China’s physical activity economy ranks second only to the United States. The sector has grown rapidly over the last decade. The proliferation of health clubs and gyms in Tier 1 cities, alongside the widespread adoption of fitness apps and other online options, has captured wide investor and industry attention. Chinese consumers in the top cities can choose from a variety of large and boutique gyms, a broad array of virtual and online options, and a growing number of sports and recreational facilities and spaces, for pursuits that range from CrossFit, spinning, and tennis to boxing, yoga, and tai chi. Although many of the popular physical activity trends originate in the United States and Europe, both domestic and international enterprises quickly adapt to the preferences of Chinese consumers.

• China’s physical activity sector is vast, diverse, and vibrant. While the size of China’s fitness/gym market is on par with Japan (both estimated at US$5.5-5.6 billion by GWI), China’s fitness participation rate is only 0.8%, compared with much higher rates (from 5-10%) in the rest of East Asia, suggesting significant potential for expansion in second tier cities and other urban areas. Traditional martial arts, with more than a thousand years of history, have lost some lustre as young people gravitate toward Western-style ‘combat fitness’.

• Outside of gyms and formal classes, a great number of Chinese exercise in public spaces, both individually and in groups, including in outdoor gyms, informal tai chi groups in parks, group runs, etc.

The popularity of ‘plaza dancing’, practiced by an estimated 100 million women (and some men) who are mostly middle-aged and seniors, has attracted investment in related music and online enterprises.

China is also a leading market for fitness technologies, and its fitness wearables market is now the largest in the world (US$4.6 billion according to GWI estimates).

• China’s physical activity sector also benefits from the government’s ongoing efforts to raise awareness about the importance of physical activity, combined with public investments in infrastructure and facilities to increase participation and reduce the disparity of access across regions. In 2016, China announced a National Fitness Plan as part of a comprehensive strategy to improve the general health of Chinese people. The plan laid out ambitious goals of having 700 million engaged in exercise at least once a week, and 435 million exercising regularly, through all types of fitness, sports, and active recreation activities, with the involvement of both the public and private sector. 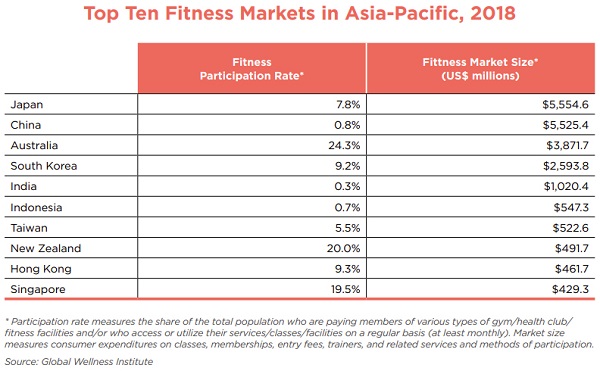 In the past few years, China has made substantial investments in public sports and recreational facilities, outdoor gyms and running paths, as well as in sports programs and promotion campaigns. A separate plan aims to build 3,000 martial arts schools. These efforts have greatly increased the awareness and interest of the Chinese public in physical activity, and they have contributed to rising participation in running, walking, hiking, community sports, and fitness training in the past few years.

They are the source of some of the world’s best-known and innovative brands, including Les Mills (which opened its first club in Auckland in 1968) and Australia-based F45, a franchise built on its 45-minute high-intensity group exercise workout that has quickly expanded to 1,300 facilities globally in just a few years. Both countries also have highly developed fitness professional markets and well-trained instructors, who are supporting a growing market for small group training and personalised training, often favoured by middle-aged and senior fitness participants. Increasing demand to address stress and mental wellness is propelling the growth of the mindful movement sector. Adjacent to the private sector, governments in both countries invest in a robust physical activity infrastructure that supports community sports and active recreation among children and youth, as well as low-cost options at publicly-subsidised gyms and community recreational centres.

The East Asian economies and Singapore have relatively mature physical activity markets marked by intense competition and the latest trends.

• Japan, Hong Kong, Taiwan, South Korea, and Singapore all have highly developed and intensely competitive physical activity markets that cater to their sophisticated consumer base. Consumers on the high-end are often early adopters of the latest North American and European fitness modules, classes, equipment, and technologies. All of these markets have experienced steady growth - from internationally branded luxury gyms to small independent studios - spurred by strong purchasing power, population aging, and rising interest in healthier and more active lifestyles. In addition to a full range of private operators, consumers in Singapore and Japan also have access to a large number of public facilities that offer lower-cost fitness, sports, and recreation activities. In Japan, public facilities account for half of the nation’s gyms, and they are supplemented with facilities in schools and universities that are accessible to the public. In South Korea, Hong Kong, and Taiwan, outdoor recreation activities such as running, walking and hiking, and exercising in parks and squares remain popular, despite the growing memberships in gyms and fitness studios, underlying the ongoing importance of public infrastructure.

• Governments in these countries are also active in promoting physical activity through public education campaigns (e.g., South Korea’s Program 7330 and Singapore’s Active Health program). Steady government investment has been supporting the development, diversification, and upgrading of active recreation infrastructure in all of these markets, especially to serve an aging population. Japan has been at the forefront of these efforts; currently, adults over 50 make up 50% of Japan’s gym users, and senior gym memberships are growing. Concern over rising healthcare costs has led the government to intensify its efforts on improving physical activity among seniors, working with communities and the private sector to motivate seniors to be active, and to increase access to facilities and programs.

An example is a major national project in Japan that will promote better health among seniors through ‘fun’ walking. Facing similar demographic trends, the Taiwan and South Korean governments are also working to keep their aging citizens physically active (e.g., Exercise for Health, a public-private partnership in Taiwan). 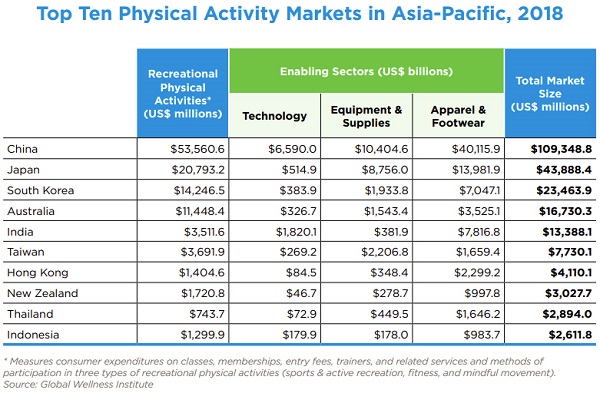 • Southeast Asian countries, such as Malaysia, Thailand, Philippines, and Indonesia, have smaller physical activity sectors, lower levels of physical activity participation, and the lowest fitness industry penetration rates in the region. Generally, young professional and urban elites in major cities, such as Bangkok, Kuala Lumpur, Jakarta and Manila, have access to a variety of fitness offerings, including large comprehensive gyms, small independent studios, start-of-the-art equipment, group classes, and personalised training. Across the board, rising obesity and chronic disease related to urbanisation and unhealthy lifestyles have been driving demand for fitness. Generally, the urban infrastructure in these countries for an active lifestyle (public parks, jogging trails, bike paths, recreational facilities, etc.) is not well-developed. Outside major cities, the infrastructure for recreational physical activity - both private and public facilities - is even more limited. The vast majority of the population lacks access to sports and recreational facilities and has limited knowledge about the importance of exercise. To the extent that physical activity is supported in schools, the emphasis is often preparing the best athletes for competition rather than encouraging physical activity for all. Several country governments have launched media campaigns (e.g., Fit Malaysia) to encourage physical activity, while also making investments to improve public infrastructure and facilities. The government of the Philippines is especially motivated to improve public awareness, as it is the host of the 2019 Southeast Asian Games.

Rising incomes from a growing middle class and emerging government initiatives targeting the health and physical activity of citizens will continue to fuel the growth of the physical activity sector in these markets.

• Despite very low rates of participation, India has a sizable physical activity economy, valued at US$13.4 billion, due to its sheer population size. In the top metro areas such as Mumbai, Delhi, and Bangalore, high-income urban professionals and a growing middle class drive the growth of comprehensive gyms and fitness clubs. However, the industry is mostly dominated by small, independent, low-cost fitness clubs that cater to consumers at much lower price points. Overall, the country lacks physical activity infrastructure, especially outdoor active recreation venues in cities. But this is changing. Since 2016, members of parliament have used local development funds to install 1,700 open-air gyms in parks throughout In Delhi (at approximately US$10,000 each), and hundreds more are being planned.

For more information go to www.globalwellnessinstitute.org